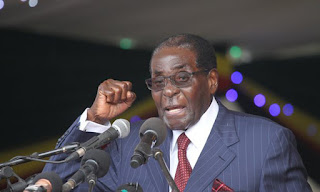 President Robert Mugabe has publicly expressed his bitterness over allegations that ice cream from his Gushungo Dairy company was used to poison Vice President Emmerson Mnangagwa at a rally in Gwanda last month, and has demanded that those who peddled the false accusations be brought to book.
The rumours are said to have originated at the funeral wake of former Minister of State Shuvai Mahofa when Walter Mzembi and other legislators were chased away for allegedly bringing poison from Gushungo Dairy.
Zanu PF provincial chairman Ezra Chadzamira, Paul Mangagwa and Gutu Central legislator Lovemore Matuke, who is also the national chief whip, were accused of creating the rumours as they allegedly were the most vocal at the funeral.
Mugabe has however came out fighting, insisting that those who falsely accused the first family and its Gushungo Dairy of 'witchcraft' should be brought to book and explain their hidden motive, leaving the trio of Chadzamira, Matuke and Mangwana in a fix.
The three, who are believed to be Team Lacoste – a faction which supports Mnangagwa to take over from Mugabe, are most likely to be kicked out of Zanu PF before year end, according to reliable sources in the ruling party.
"Chadzamira might lose the chairmanship for good now; mind you he was once suspended few years ago and only re-elected not so long ago. But he will not go alone this time around but with Mangwana and Matuke. They were too vocal at Mahofa's funeral saying she was poisoned by (Generation 40) G40 faction," said a top Zanu PF official.
The witchcraft accusations reached a boiling point at the funeral of Mahofa, Mnangagwa's strong ally, where youths burst into songs accusing the first family and G40 for the sudden death of Mahofa.
However, this did not go well with Mugabe and his wife Grace, who insisted that those who were spread such malicious accusations be punished.
"The President and the first lady have their share of insults, several ministers and others had also these accusations, completely false, completely malicious and emanating from the same sources.
"Tinoda kuti vazvisvipe vange vachiita izvi, maprovince mazviri kubuda ndiwo atiri kukumbirisa kuti vanatsoona kuti ndivanani, zviri kubva papi uye zvichiitirwei? Zviregedzwe. Pachivanhu tinoti svipirai pasi. Hatichazviita," said Mugabe.
Mugabe also subtly accused the late national hero Eddison Zvobgo of tribalism, a problem which he indicated was still prevalent among people from Masvingo and the Midlands provinces.
Some people in Masvingo however described the claims by Mugabe that Zvobgo was tribalist as nonsensical and said it was mere hatred.
When contacted for comment, Chadzamira said they held a Provincial Coordinating Committee (PCC) as well as Provincial Executive Committee (PEC) to deliberate on the issue last week but no one said anything about the whole witchcraft accusations.
"We had a PCC and PEC to discuss that matter and everyone was given the platform to name people who are said to have accused the President of witchcraft. All the senior members of the party attended that meeting and no one said anything except for Paul Chimedza and Denford Masiya who said they were harassed at Mahofa's funeral.
"We gave everyone the opportunity to point the people responsible for making the witchcraft accusations to the President and First Family but no one said anything and now there are others who run to the media to try and appear holier than thou.
"I know the person saying that is Daniel Shumba but he did not say anything in the PCC. We will not be deterred by such people and we stand by our President," fumed Chadzamira.
"The President called for unity in the party and we will not glorify this cheap talk. No one in my executive ever accused the President of witchcraft and we had a PCC where that issue was on the agenda but Shumba kept quiet.
"Masvingo will always remain loyal to the President and the first family. We disassociate ourselves from such rumours," said Chadzamira.
Shumba, however, came out guns blazing saying if Chadzamira was as innocent as he claimed to be, then he had nothing to fear.
"Chadzamira anovhundukei. Let the facts speak for themselves. He wants to show loyalty to the President today yet he wants to remove him with his Lacoste faction.
"Chadzamira is a reactionary man. He lost primaries in 2008 when he was still with the MDC-T party and he bribed his way to the top of the province in Zanu PF. I am not on the same level with him as a man, legislatively and academically," said Shumba.
Meanwhile, Gutu West legislator Tongai Muzenda is said to be the top contender to take over the position of Minister of State for Provincial Affairs following the death of Mahofa.
Muzenda, who is son to the late Vice President Simon Muzenda, was once a deputy minister before he was relieved off the duty following allegations of him being linked to the former Vice President Joice Mujuru who was later fired from both party and government.
Muzenda was later cleared of any wrong doing and Mugabe might appoint him to the powerful position in the province.
"Muzenda is the front at the moment; he has the highest chances of landing that position. What is certain is that position will never be given to anyone from Team Lacoste faction," another top Zanu PF official said.top news
Share !