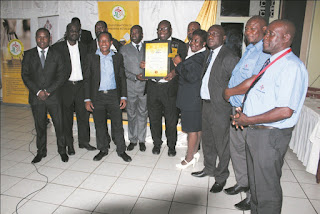 MASVINGO – Diversified retail and wholesale giant N. Richards Group last Friday night added nine more slivers to its already star-studded band of glory when it was named Masvingo Retailer of the Year 2017 after bagging five other awards at the Confederation of Zimbabwe Retailers (CZR) Masvingo Retailers and Wholesalers Awards held at Flamboyant Hotel.
The awards came a few months after the group won the Community Choice Wholesaler Award at the 2017 Lowveld Community Development Awards held in Chiredzi last July.
At the CZR awards, N. Richards Group stole the limelight with its numerous accolades at an event meant to honour companies with a visible footprint on the local retail scene, while rewarding them for remarkable customer service and for support for local suppliers among other things.
The awards that the company won are Retailer of the Year - Local Procurement, Retailer of the Year, Wholesaler of the Year, Supermarket of the Year - Suppliers Choice, Supermarket of the Year - Consumers Choice, Best Retailer - Branch Network and Best Retail/Wholesale Employer of the Year.
N. Richards Group chairman Graham Richards won the Retail Legend Award while company director Andrew Chekani was named Retail Personality of the Year.
Speaking at the event, CZR chief marketing officer Stanley Bote congratulated all winners saying he was pleased that retailers in Masvingo province were soldiering on quite well in face of adversity.
"We all know the challenging economic conditions in which retailers are operating; the liquidity challenges in the economy, yet we have here companies that are pushing on regardless of the great adversity they face.
"I want to congratulate all winners for these well-deserved awards that are a recognition of the tireless work that retailers are doing for the development of our economy and the growth of local manufacturing," said Bote.
Speaking to TellZim News later on, Chekani praised N. Richards Group customers whom he credited for the continued growth of the business at a time when others are folding.
"Pasina imi vatengi hapana zvatiri, that is our motto and we mean exactly that. We are servants of our customers. They make this possible through every coin they leave with us. We thank them for that support and we promise to continue giving them the best service.
"The awards showcase the vast work that N. Richards Group has done over the years especially in Masvingo province. We also thank our staff for this; we work as a team and that is why we have these awards," said Chekani.
N. Richards Group, which operates a total of 30 branches countrywide, is renowned for its unequalled commitment to the Buy Zimbabwean campaign as well as for the affordability and quality of its products.
The awards ceremony, which was also graced by CZR president Denford Mutashu, attracted most of the major players and change makers on the local retail business scene.
Other companies that won awards were Major Family Servings (MFS) – formerly Masvingo Farm Supplies, Nyaningwe Supermarkets, KwaMai Anna, Donja Investments, OK, Chingwanga Enterprises, Billcro Investments, Pick n Pay and Gain Cash & Carry.business
Share !