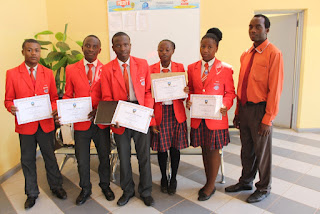 BIKITA – Five Pamushana High School upper six pupils last week shined at Bindura University of Science Education (BUSE) 2017 Olympiads with all of them finishing in the top 20.
Zororo Mupunga scooped first prize in physical science while Rosalind Chibura took the second prize in Biology, with Talent Mlambo taking the fifth place in the same subject.
Listener Murindashiri took 10th position in computer science while Tapiwa Dzviriri took the 19th place in mathematics.
For her efforts, Mupunga won a laptop as the first prize and all pupils brought back certificates.
Mupunga and Chibura attributed their win to hard work and praying to God as well as listening to their mentors.
"The competition was tough and the win was a result of hard work and praying and that's the only secret to success," said Zororo.
Pamushana High biology teacher, Eckson Nyasha, who accompanied the pupils to the Olympiads, said the competition was tough but he had always been confident that his pupils were going to sail through.
The Science and Mathematics Olympiads is an annual programme run by BUSE in partnership with the Ministry of Primary and Secondary Education with the aim of identifying talent and encouraging children to take up those subjects as they progress with their education.
The subjects on focus are Biology, Chemistry, Computer Science, Mathematics and Physics.education