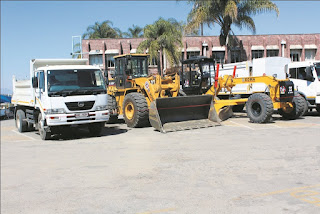 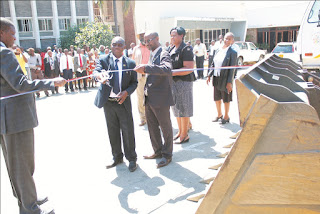 MASVINGO – Director in the office of the Minister of State for Masvingo Provincial Affairs Kudakwashe Machako on Monday commissioned earthmoving equipment procured by City of Masvingo using funds raised through the roads levy.
The levy was introduced in 2015 amid strong criticism and objections from residents who felt hard pressed by the city council. The levy ran for six months at a cost of US$3 per household.
Addressing city of Masvingo councillors, management, employees and residents who gathered at the Civic Centre to witness the event, Machako praised residents for their cooperation which made it possible for the equipment to be bought.
"Infrastructure development and maintenance is critical for development and we support the close working relationship between council and residents as it made it possible for these vehicles to be bought," Machako said.
He said it was out of that realisation that council was trying to improve the condition of roads which are taking a battering as a result of poor funding from the Zimbabwe National Roads Authority (Zinara) and poor council revenue inflows.
City of Masvingo Mayor Hubert Fidze also thanked residents for paying towards the levy despite the difficult economic conditions they face.
"We understand the difficulties that our residents face. As council, we would like to thank them for their support which allowed council to buy this equipment," Fidze said.
Council says more than US$489 000 was raised through the levy and the equipment bought are a motorised grader, front end loader, tipper and a refuse compactor at a total value of US$425 123.
A recent study of the city's roads under National Road Condition Survey revealed that the city had a road network of 257 km, only four kilometres of which is in good condition,.
A total of 153 km of the road network is considered to be in fair condition while the rest is in poor condition.local
Share !