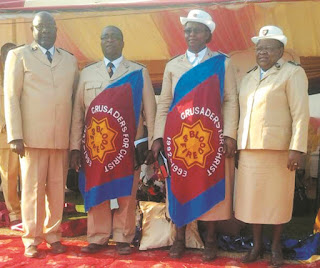 The Salvation Army Masvingo Division held its 2017 annual congress at Masvingo Show Ground under the theme 'Living Christ Values' which included other topics like self-reliance and maintaining salvation.
The congress, which began on Friday, September 15 and ended on Sunday, September 17, was attended by hundreds of Salvationists from different parts of the province.
It was also graced by Commissioners Joash and Florence Malabi who are the Territorial Commander of Zimbabwe Territory and the Territorial President of Women's Ministries respectively. They came to Masvingo in the company of captains Obert and Aletta Chemhuru.
A number of activities such as the installation of divisional leaders Majors Chimbalanga, the commissioning of Beitbridge Corps and Mazare Society, marching, Bible lessons and preaching sessions were held.
Presentations from all sections among Masvingo Division blessed the congregates with Howard High School pupils being the centre of attraction as they mesmerised the gathering each time they presented an item.
The Territorial Commanders, who are originally from Kenya, expressed their love for Masvingo Division which they said it is their home since their son got married to a Zvishavane soldier.
They enjoyed the fact that in Masvingo, there are a lot of intellectuals as well as people who can praise whole heartedly.
Major Luckson Chimbalanga, the Divisional Commander for Masvingo Division, said he was happy with how the congress was contacted.
He pointed out that it was a well-planned congress with devoted soldiers, saying such factors as excellent management and good setup had led to and successful congress.
"I was happy with the activities that made the congress to be a success. I received comments about the congress from as far as Mauritania. The theme of the congress was well received and soldiers turned up well," said Major Chimbalanga.religious
Share !