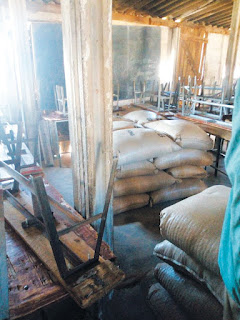 Bags of maize are being stored in classrooms at the school

ZVISHAVANE – Pupils at one rural school in the district no longer have enough learning space as they now have to share their classrooms with large sacks of school fees that they have been paying over the months such that the school has run out of proper school fees storage facilities.
The newly-built Shonhai Secondary School in under Chief Mapanzure in Zvishavane rural has been accepting maize grain as school fees for children, most of whom come from very poor households.
This began after the Minister of Primary and Secondary Education Lazarus Dokora made suggestions earlier this year to the effect that cash-strapped parents could pay their children's school fees in kind; including goats.
The statements attracted widespread ridicule and social media jokes such that Dokora was forced to clarify matters, saying his words were maliciously misinterpreted.
The Shonhai Secondary School Development Committee (SDC) however says it has hundreds of kilogrammes of grain overflowing in its storerooms and some of the grains is being stored in classrooms.
"We are facing challenges in terms of storage space for the bags of maize and the school can hardly afford to transport the grain for delivery at the nearest Grain Marketing Board (GMB) in Zvishavane," said Lorraine Badza, a member of the SDC.
Other parents also said they stay many kilometres away from school and paying school fees using grains was just as hard due to transport costs.
"The ideal situation is for us to deliver the grains straight to GMB and raise cash to pay school fees for our children but GMB is taking too long to pay us. This arrangement gives an assurance to the school that we are willing to pay so that they don't expel our children over non-payment of fees," said another parent.
When contacted for comment, Dokora said he had nothing to do with the issue as he never sanctioned the use of grain to pay school fees.
"Did I ever say they should pay in grain or it was just a suggestion to make it easy for the parents since they don't have cash? It's up to the school to receive those bags of maize. I don't want my name to be dragged through the mud. Don't misinterpret a suggestion," said Dokora.education
Share !