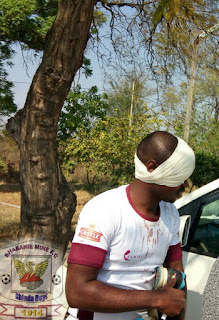 The Shabani Mine FC management has pledged to throw their weight behind the club's technical manager Taku Shariwa saying they believe he can still achieve a turnaround in the fortunes of the club.
Shariwa has been under immense pressure from a cross section of fans for apparently presiding over a poor run at Bvaru Bvaru, a situation which has left the team teetering in the red zone of relegation.
While driving in town last Sunday morning, Shariwa was savagely attacked ostensibly by an irate fan who was displeased by the poor showing of the club.
"Taku Shariwa was attacked by an unknown assailant using an empty bottle at the robots in Zvishavane town and he sustained a deep cut above his eye and head and was admitted at Shabanie Mine Hospital where he was stitched on the wound and discharged," said Shabani Mine FC spokesperson Weston Wesley.
The club management condemned what it called the barbaric act exhibited by the unknown assailant and encouraged fans to air their grievances amicably.
They denounced violence as an improper way of making grievances know, saying nobody would deliberately case the team to perform badly.
"Of course, supporters are not happy with the current performance but they do not need to go that far. We are also not happy with the current form, but we are really confident in the technical department that they will soon get it right," said Wesley.
Shabani Mine are facing a tricky encounter in their next fixture against title contenders Ngezi Platinum FC at Maglas Stadium this weekend.sport
Share !