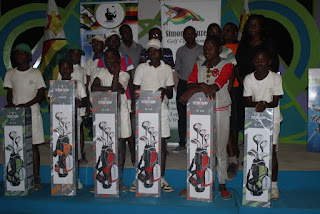 MASVINGO – Dozens of children who received golf kits courtesy of the Simon Muzenda Foundation are making impressive strides in the game, with four of them scheduled to play in the Juniors Division of the 2017 edition of the Simon Vengesai Muzenda Golf Championship early next month.
On 10 September, some of the junior golfers travelled to Hippo Valley Golf Course where they competed against other players from the Lowveld.
The tournament, which was played over 18 holes, attracted close to thirty children and it saw St Don Bosco Primary School pupil Modesta Masiya, who plays 36 handicap, emerging overall winner with 103 gross and 67 nett points.
Another beneficiary of the foundation's junior golf development programme, Vimbai Chomutiri, who also plays 36 handicapp, played very well and finished at number six with 112 gross and 76 nett.
Cephas Ngwenya Jnr and Nyasha Dziwore took numbers seven and nine respectively with 106 gross and 82 nett for Ngwenya, and 108 gross and 84 nett for Dziwore.
Both Ngwenya and Dziwore play 24 handicapp.
Masvingo Golf Club coach Richard Masiya, who travelled with the junior players to the Lowveld, said he was pleased with progress the children had made since the Muzenda family committed itself to their growth in the game.
"Our children are doing remarkably well and we are looking forward to producing our future champions. They played very well in the Lowveld and we are exploring how we can expose them to more competitive golf in the region.
"Most of them are using quality equipment donated to their schools by the Simon Muzenda Foundation and this has helped to grow their interest and zeal for the sport," said Masiya.
He also told TellZim News that he wanted to assemble a formidable fourball which will most probably be made up of Munyaradzi Munapi, Modesta and twins Calvin and Malvern Mutemachani to compete in the Simon Vengesai Muzenda Golf Championship next month.
The Simon Muzenda Foundation was formed to honour and preserve the legacy of the late nationalist and late Vice President Dr Simon Vengesai Muzenda.
Share !