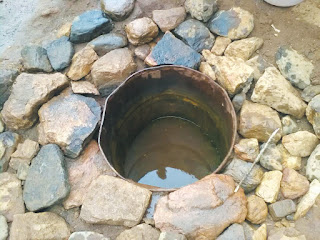 ZAKA – More than 66 households in wards 28, 29 and 30 under Chief Bota have no access to clean water and are relying on mufuku – a small well dug on a dry riverbed – on the narrow Musungusungu stream, TellZim News can reveal.
Last week, representatives from District Development Fund (DDF), Agritex and Zaka West legislator Vincent Mawere paid a visit to the area after reports of disputes over access to the well.
It was established that these households depend on water from the well, which they have since named Chikanga, for drinking, cooking, laundry and watering their gardens.
"I am old now and I have grandchildren and this has been our only source of water. Some areas have had the privilege of boreholes but we have not been that fortunate," said Egnes Chavizha.
Another old villager, Esnath Chipanera said the water point was often congested and was not safe for young children who risk drowning since the well is not protected.
"Vamwe vakadzi vaviri vatori pano vakawira mumufuku uyu, kana mvura yava shoma panotyisa apa, zvekuti munhu akange ari ega anofiramo," Chipanera.
Ward 30 councillor fortune Maputsa said the area has never had a borehole or any better source of water.
"To some people, the closest borehole is six kilometres away while for others it's five and those who are closer have to walk about three kilometres. However, many find it easier to fetch water from Chikanga than to walk long distances to fetch cleaner water," said Maputsa.
On his part Mawere promised to work hard and mobilise resources so that better sources of drinking water can be established.
"I will engage the local authorities and DDF and the Ministry of Environment Water and Climate so that we find a solution to this problem. As for now, we encourage people to boil their drinking water," said Mawere.local
Share !