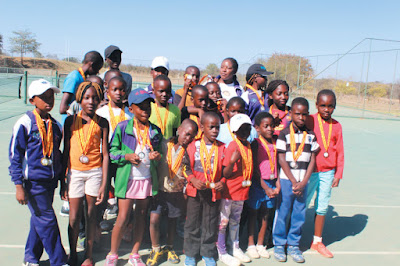 MASVINGO – The province recently outclassed many rivals and won the floating trophy after scooping 13 gold medals, 13 silver and six bronze medals the Junior Open Tennis Tournament played at Kyle College recently.
The Tournament was sponsored by Tam Chattered Accounts and Zimbabwe National Waters Authority (Zinwa).
The guest of honour at the tournament former Masvingo Sports Club president and successful businessman Setfree Mapuvire who thanked local organisers for a job well done.
"I hear there are players from Botswana here, this shows that Masvingo Tennis Club is growing. To participants, I urge you to maintain your good characters that will help sustain your talents," said Mapuvire.
Masvingo Tennis Club coach Privy Fanisai was happy with her club members' performance saying it all goes to the spirit of hard work among the players.
"The players made us proud and I hope they will keep the spirit and continue winning in the next tournaments," said Fanisai.
Masvingo Tennis Club officer responsible for marketing and publicity Pikisai Mhizha said the club wanted to attract more participants regionally and make the event bigger.
"We want to improve the tournament by attracting more participants. We are engaging potential sponsors and some bigger names have promised us their support. We hope that next time, the tournament will be bigger.
The Masvingo provincial team was made up of players from Masvingo Tennis Club and Dash Allan Club while their competitor came from everywhere including Bulawayo, Harare, Mashonaland East, Midlands and Manicaland provinces while others came from as far as Botswana.
Masvingo dominated in Red Ball boys category where it scooped all medals and in Orange Ball boys where the team scooped gold and silver. It also had the same medals in Red Ball girls doubles.
Under 14 doubles Harare Open winners Deborah Mhizha and Chloe Chiweshe did it again by winning in the same category.sport
Share !