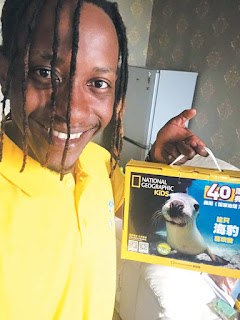 MASVINGO - Tinashe Bepete, an avid singer from Masvingo who is now set to be part of the National Geographic Learning, says he will always cherish the encouragement he got from his family while he was still at school.
Bepete's family played a pivotal role in the discovery of his talent by forming a choir which would sing at any given moment mainly as a way of helping him to improve his skills.
His initial dream, however, was to become a medical doctor until he got a rude awakening when he finished his primary education with 14 units at Victoria Primary School.
Secondary education became even tougher when he went to Dadaya in Zvishavane before transferring to Kyle College three years later.
"Kyle College was a school of many possibilities. As much as I wasn't doing well in school, I excelled in singing. With the help of my music teacher Mrs Austin, I attained Kyle's first ever Eisteddford trophy for my solo, 'Blue moon,' and a series of Honours certificates."
Eisteddford is one of the four annual events organised by the National Institute of Allied Arts to help drive Zimbabwe's vibrant arts into the future by nurturing budding artists and children from a young age.
With four points at 'A' Level, Bepete moved to Beijing Institute of Technology, China, in 2013 where he studied Chinese but he still stubbornly wanted to study medicine. Realising he would not cope, he enrolled for International Economics and Trade in 2014.
Yet his singing talent has been shining upon him like a star and while singing and playing the piano in a store one day, the owner took a video of him and shared it with his friends resulting in his first part time job as a music instructor at the talent building New York Kids Club which enrolls kids as young as eight months old.
Now in his final year, teaching music at NYKC has led to a full time job offer with the National Geographic Learning, an after-school intensive English learning programme focusing on animals, travel and different cultures.
"Life has no known equation to it. Never hold back. Keep pressing," Bepete told TellZim News.entertainment
Share !