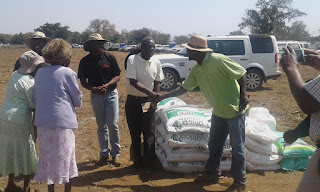 CHIREDZI - Tongaat Hullet Zimbabwe (THZ) has encouraged sugarcane farmers to improve yields, saying the export market was expanding as the company was now set to export 18 00 tons of processed sugar to the United States.
Many small scale sugarcane farmers in the Lowveld are contracted to the sugar giant which is the sole miller and buyer of all cane.
Addressing farmers at a field day organised by the Zimbabwe Sugar Association Experiment Station (ZSAES) in Chipiwa plot 276 K Block in Mkwasine, THZ executive responsible for operations, Aiden Mhere said the sugar industry accounted for 5 percent of the country's Gross Domestic Product (GDP).
He said the company expected to produce a record 600 000 tons of sugar in the 2018-2019 season from the current 350-400 000 so that American demand can be consistently met.
"Our international markets are increasing. We supply half of the sugar consumed in Botswana and Namibia. We received a quota to supply America with 18 000 tons of sugar as from this year. We also export our sugar to Europe," said Mhere.
He said production in Chipiwa had dropped from 114 tons per hectare in 1994 to current average yields of 37 tons per hectare.
"You should convert farming into a business regardless of land size. An efficiently organised farmer with only 10 hectares can produce more than the one with 20 hectares but disorganised.
"In China, someone with a one hectare plot is a rich farmer. Others have one acre plots and 0.5 hectare plots but they use their land intensively for better output," said Mhere.
Chipiwa was first developed by THZ and government soon after Independence and was housing 191 sugarcane farmers who were using overhead irrigation.
About 1 910 hectares of land was developed with each farmer getting 10 hectares and they were performing better than those with bigger portions of land.
Recently, Canelands Trust injected about US$12 million to rehabilitate Chipiwa as irrigation pipes were being stolen.
Farmers there are currently using flood irrigation and their output, which had gone down to a measly 37 tons per hectare in 2010, rose to 76 tons per hectare in 2014.local
Share !