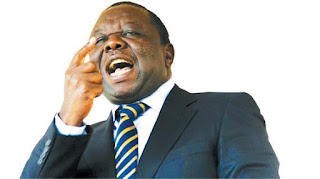 MASINGO - Rural Development, Promotion and Preservation of National Culture and Heritage minister Abednico Ncube last week lashed out against Movement for Democratic Change (MDC-T) leader Morgan Tsvangirai, labelling him a 'spent force' with no thoughtful political followers.
Ncube made the remarks while was commissioning the Summerton Piped Water Scheme, a project undertaken by Masvingo Rural District Council in partnership with United Nations International Children Emergency Fund (Unicef).
The minister said unlike the opposition, the ruling Zanu PF party had the capacity to initiate rural development projects that help the people of Zimbabwe.
"In Zimbabwe, you should only look to Zanu PF to solve your problems. There are others who are being led astray by Tsvangirai who is nothing but a spent force.
"His people no longer trust him and they are up in arms against each other. The British tried to use Tsvangirai to peddle the regime change agenda but Zanu PF has remained in charge," said Ncube.
Tsvangirai is on a collision course with his long time deputy Thokozani Khupe, national organiser Abednico Bhebhe and national chairperson Lovemore Moyo over the 'ill-negotiated' MDC Alliance.
Ncube went on to launch a scathing attack on former US President George Bush and former British Prime Minister Tony Blair saying they were mistaken to think the Republic of Zimbabwe cannot survive on its own.
"I am going to read my speech in English so that Blair and Bush can understand that the Republic of Zimbabwe is a sovereign state and they cannot dictate or impose anything on us," said Ncube.
The Summerton area in Masvingo North constituency experienced acute water shortages over the years and people survived from water from Mucheke River.
"Tsvangirai haazvingoni izvi. Right now people are drinking tap water in rural communities courtesy of the Zanu PF-run administration. Tsvangirai should stay in opposition because that is what he is good at. We should all remain vigilant and rally behind President Mugabe in 2018," said Ncube.topnews
Share !