Vendors march against vendors in Gweru 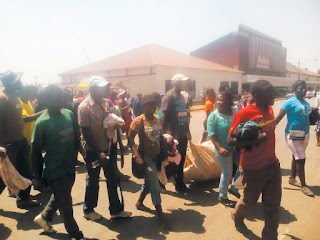 Vendors march against other vendors in Gweru last week

GWERU – Informal traders operating at designated stalls behind Swift Complex in the light industrial sites last week demonstrated against those operating illegally, forcing many off the streets.
One of the demonstrators, Phillip Musi said he was angry that he had to compete with unregistered vendors who pay nothing to council.
"We have suffered enough. We were moved to designated stalls recently but others are sticking around in town and this is a disadvantage to us. That's the reason why we rose to take them out of the streets ourselves.
"It's just so painful that you pay to sell from a designated selling point and someone operating illegally takes all the customers," Musi said.
An unidentified female vendor who was among the demonstrators said she too was angry with those who were operating at undesignated sites.
"Most of them have been given regular stalls but they are leaving them and getting back to the pavements. This is unfair because we are paying to sell our wares and they are not. They must come to the Swift," she said.
City of Gweru Mayor Charles Chikozho, who is on record saying council had given up on vendors, pointed out that the demonstrators' grievances were justified.
"I can't blame them for that action because they too are worried for their businesses. No one would want to get into business and then be made to compete with somebody operating illegally. The set-up is not fair to them at all.
"I am not justifying clashes between the groups but I understand that these people expect authorities to protect them. As council, we are incapacitated, we can't remove vendors and the police also say they cannot do it and that is why we have engaged the Ministry of Local Government," Chikozho said.local
Share !