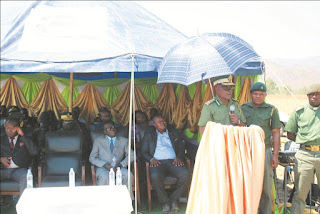 MASVINGO – The Voluntary Service Organisation (VSO) Zimbabwe last week handed over an extended three-hectare drip irrigation facility to Mutimurefu Prison farm.
The donation was as a result of a partnership between the Zimbabwe Prisons and Correctional Service (ZPCS), Batanai HIV & AIDS Service Organisation (Bhaso) and VSO.
In an acceptance speech read on his behalf by ZPCS Deputy Commissioner General (DCG) Moses Chiobvu, ZPCS Commissioner General (CG) Rtd Major General Paradzai Zimondi thanked the non-governmental organisations for boosting the horticultural production capacity at Mutimurefu.
"Today's ceremony has been ushered in through VSO's considerate partnership with ZPCS in the form of the extended drip irrigation facility which is, no doubt, critical in boosting the station's horticultural production which enhances and boosts the inmates' nutritional support scheme," said Rtd Maj Gen Zimondi.
He also praised the scheme which he said will help in Mutimurefu's prisoner rehabilitation work.
"More so, extension of the drip irrigation scheme also means that more inmates would be exposed to some rehabilitation activities that include training on nursery management and horticultural production," Rtd Maj Gen Zimondi said.
He also said the facility came at an opportune time when the institution was in great need of such support which said was critical to facilitate and improve horticultural production, adding that the scheme dovetails with government efforts to improve food security and nutrition.
It was also heard that the extension of the drip irrigation lines and pumps increased production at Mutimurefu Prison farm by making it possible to run a sustainable horticultural project on 15 hectares of land.
Such vegetables as carrots, cabbages and tomatoes are among the produce that the irrigation scheme specialises in.
Bhaso director Simbarashe Mahaso said under the organisation's rehabilitation and integration efforts, they have managed to support 100 inmates with skills development.
He said many inmates have graduated with certificates in different trades at Mugashagashe Training Centre.local
Share !