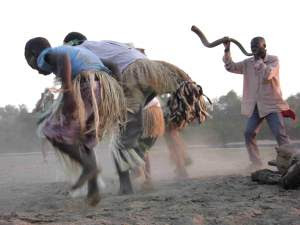 …messages on circumcision should be in Xangani

CHIREDZI – People who recently gathered for a voluntary medical male circumcision graduation ceremony at Mhlanguleni protested what they described as the dominance of outside languages on traditional Xangani cultural rituals, TellZim News can reveal.
Some participants bitterly castigated the Ministry of Health and Child Care and its partner Population Service International (PSI) for prioritising Shona and Ndebele at the expense of minority languages, in this case Xangani (also spelt Shangani).
In 2011, the ministry and PSI began to partner traditional leaders in Chiredzi, particularly the Xangani, to advance the voluntary male circumcision drive because male circumcision had been part of the Xangani culture since time immemorial, albeit being carried out in a traditional way.
In a speech read on his behalf by Chiredzi Rural District Council Chief Executive Officer (CEO) Isaac Matsilele, Chief Sengwe urged everybody to abide by the Xangani culture if the partnership is to succeed.
"Your banners and regalia should be branded in Xangani as those graduating are of Xangani origin," the speech read, as if in response to the many banners and paraphernalia that were mostly branded in Shona and Ndebele.
However, PSI deputy country director Clinical Programmes, Dr Ngonidzashe Madidi justified the use of other languages in the circumcision drive, saying the messages were designed to cater for a wider audience while riding on back of the old Xangani tradition.
"In 2011 we had regalia which were branded in Xangani stating 'HOKO' in the front and a statement in the back. When the programme grew, we realised that the work being done in Chiredzi should not only end in Chiredzi but that it should influence the whole nation.
"We want the nation to know that this is a national programme they can join although it has its roots in Xangani culture. So if we have messages written in Xangani only, their impact will be limited because many people do not understand the language," said Dr Madidi.
Chiredzi South Member of Parliament Rtd Brig Gen Gwanetsa, who is Shona by origin, said he was happy to be part of the process as he wanted to prove the inaccuracy of rumours that people die at such rituals.
"It is a common cultural value of the Xangani people in Mozambique, South Africa and Zimbabwe. It is very good and I participated for my personal health and those people honoured me. I am the first Shona speaking person to represent them in parliament so I have to honor their culture," said Rtd Brig Gen Gwanetsa.local
Share !