Zaka man hangs self after failing to kill son 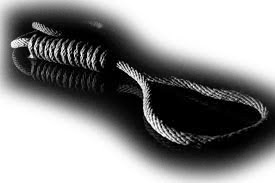 ZAKA – David Vaviri of Mutubuki village under Chief Nyakunhuwa reportedly hanged himself by the cattle kraal at his homestead last week after stabbing his son with a knife on the chest following a misunderstanding over infidelity by David's wife.
Vaviri was found hanging a day after he had stabbed his son Nyasha Vaviri during a fight which reportedly started with the latter accusing the former of mistreating his mother, David's wife.
Mutubuki village head, Joseph Mutubuki confirmed the incident but referred all further questions to the police.
"It's true, Vaviri hanged himself after he had stabbed his son following a misunderstanding but right now, I don't have details of what really happened. The police may have the details.
When contacted for comment, acting provincial police spokesperson Ass Insp Kudakwashe Dhewa confirmed the incident.
"Yes we received the report and we urge people to engage the police or elders when faced with problems," said Ass Insp Dhewa
At the burial, the village head reportedly spoke strongly against violence and advised people to seek counseling when disputes arise.
Other sources who spoke to TellZim News said on the day in question, Vaviri returned home from a beer drink and found his wife not at home.
He then heard voices from behind the goat pen but when he went to investigate, he did not see anybody. He however found his wife having some good time with another man on his return to the goat pen.
"Akavawana kuseri kwechirugu mukadzi achitoti kuchikomba wandirwadzisa saka wedzera dollar," said the source.
It is further alleged that Vaviri told his sons the following morning about what he had seen but David allegedly defended his mother and accused his father of abusing her.
"A fight ensued between father and son and Vaviri produced knife and allegedly sliced his son on the chest leaving a deep cut. He reportedly then fled to some of his relatives in the Mutamba area but only for his body to be found hanging the following morning.top news
Share !