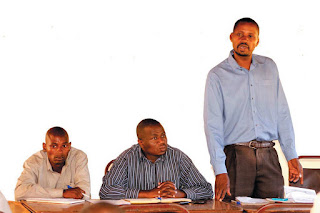 ZVISHAVANE - The Zvishavane Mberengwa Miners (ZMMA) has welcomed the arrival of Onpoint Resources Private Limited, a company which sells chemicals that are used in the mining industry.
Onpoint Resources Pvt Ltd sells cyanide, caustic soda, lime and all chemicals used by the mining industry.
Onpoint Resources regional marketing manager Clemence Dhliwayo Mabhanga said the company had seen it necessary to expand to Zvishavane due to potentially high demand for its products.
"We have decided to open a branch in Zvishavane as it is a hub of mining activities, so that even miners from Masvingo can easily access our products because the two towns are not far from each other," Mabhanga said.
He also said the company provided lab facilities for minerals, technical backup for mining companies as well as expert facilitation for seminars.
The company, which opened its Zvishavane business in July this year, was recently invited to attend one of ZMMA's monthly meetings.
Speaking at that event, ZMMA chairperson Themba Sibanda said he was pleased with the presence of a chemicals supplier on miners' doorsteps.
"Accessing chemicals has been made easy. This is should count as an advantage to us because it has improved the ease of doing business," said Sibanda.business
Share !