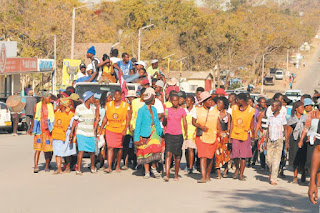 ZVISHAVANE - A subdued mood characterised the burial of local vendor and avid Shabanie Mine FC supporter Mensheviks Goromondo Moyo, popularly known as Dhala, who was allegedly murdered by one Decent Maphosa after a misunderstanding over a razorblade.
His body was brought to the place where he used to display his wares in front of Edgars store with mourners singing Bvaru-Bvaru songs and condemning Maphosa for the alleged murder.
The procession slowly moved through town before heading for Mandava cemetery where the body was laid to rest.
Maphosa's father was overwhelmed by grief such that he failed to give TellZim News a comment and referred all questions to other family members that however failed to give any comment as well.
Dhala was stabbed last week allegedly by Maphosa after a misunderstanding involving a razorblade and the injuries he sustained became the cause of his death.
It is alleged that the deceased had found a customer who needed a screen guard on his phone but Dhala did not have a razorblade needed to do the job so he asked for it from another vendor who however refused to lend him.
Maphosa, who worked closeby, reportedly then shouted on top of his voice, mocking Dhala for apparently being a 'beggar' who never had all the tools of work.
This is said to have cause a fight between the two with Maphosa later producing a knife and using it to stab Dhala on the back, an attack which killed him moments later.local
Share !