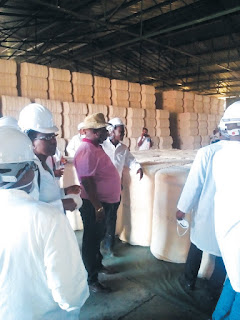 CHIREDZI - The Agricultural and Rural Development Authority (Arda) is moving to take back Magudu Ranch, Uswaushava in Chiredzi North, from the thousands of new farmers who were settled there at the beginning of the Land Reform Programme in the early 2000s.
Arda reportedly abandoned the ranch some few years ago but is now eager to get back after reportedly finding an investment partner in the name of Integrated Construction Project (ICP).
The farmers, some of whom are into cotton farming, complained that they are being threatened with arbitrary eviction and this was affecting their preparation for the 2017/2018 cropping season.
They aired their grievances to members of the Parliamentary Portfolio Committee on Land, Agriculture, Mechanisation and Irrigation Development which was recently on a visit to the area to assess the impact of the Presidential Cotton Input Scheme.
Committee chairperson, Christopher Chitindi (Zanu PF MP for Muzarabani South) however advised them to put their case in writing, which they later did and they also wrote to the Ministry of Lands and Rural Resettlement.
He promised to look into the dispute, adding that parliament was set to pass the Zimbabwe Land Commission Bill into law which he said would help cases of farmers without offer letters.
"We are about to pass the Zimbabwe Land Commission Bill which is aimed at resolving these kinds of conflict. You should put all your concerns in writing addressed to our committee.
"It's long overdue, you were supposed have offer letters by now and we are going to look into your issue very soon," Chitindi said.
One of the farmers, Emmanuel Nyathi said people at the ranch were no longer sure about their future as they did not have offer letters.
"We were resettled here in 2000 but we were not given offer letters. People from Harare are now busy getting offer letters for the same land because they now realise the importance of agriculture. We don't know where we would go if they make good of their threats," said Nyathi.
Magudu Ranch used to be Arda property and was extensively used for cattle ranching until the onset of the Land Reform Programme when the parastatal allocated 6 000 hectares of the land to new farmers and remained with 5 500.
Later, Arda withdrew all its remaining operations at the ranch after the new farmers began to steal its fencing materials and encroaching into its remaining portion of the land.local
Share !