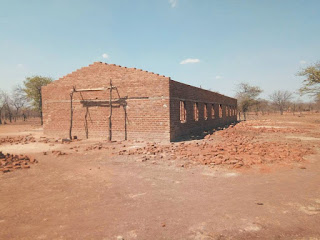 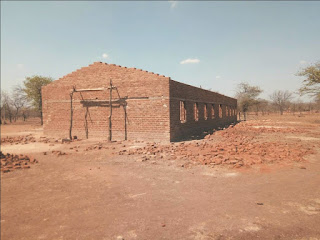 The classroom block being built at Lisama

CHIREDZI - Ingwani villagers under Headman Chilonga have been praised for their collaboration to construct a semi-detached pilot classroom block at Lisama.
The community came up with the idea of constructing an education centre in 2012 in response to the plight of children who were walking long distances to nearby schools.
Their efforts were, however, disrupted after bricks were destroyed by hail storm but Christian Care later came and built toilets.
Addressing a ward development meeting at Headman Chilonga's homestead last week, chairperson of the Lisama building project, Liyenga Mzamani said community members started by mobilising funds from their seasonal farming activities.
"The funds were mobilised from the many parents who grow sorghum for sale. The money raised helped to pay builders and cover other expenses.
"We would also like to thank our Member of Parliament Denford Masiya for donating 20 bags of cement towards the construction of this structure. We do not forget the six headman in Chilonga who worked very hard to make this goal a success," said Mzamani.
Jerry Masiya who represented Denford Masiya, the MP for Chiredzi East, praised the collaborative community effort which he said had helped to make the project a success.
"The closest school to Ingwani village is 12 km away from Chilonga business centre and there is yet another village ahead of Lisama about 6 km away. It is strenuous for a grade one pupil to walk 18 km daily so building a school in this area is a welcome development," said Masiya.
The classroom block, which is now at the roofing stage, will be taken over by Chiredzi Rural District Council.
The community is also constructing an eight-roomed building to house teachers.
Share !