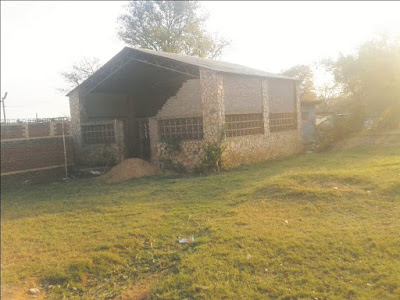 The dilapidated building being used by ECD children at Chitsanga Hall

CHIREDZI - Ward 3 and 4 residents in Chiredzi are complaining about the alleged hiring of unskilled workers to run the council pre-school at a dilapidated building at Chitsanga Hall.
Residents who recently attended a tariff consultation meeting at the hall said unskilled employees were not doing justice to the education rights of the ECD pupils.
Two senior council officials; town secretary Charles Muchatukwa and town engineer Wesley Kauma attended the meeting but did not address those specific concerns.
"The education being given to children at the ECD centre is poor in comparison to what is happening everywhere else. Children who graduate from that place struggle academically and they are being rejected by primary schools when they want to begin grade one," said Liberty Macharaga of Ward 4.
Another resident said authorities must quickly replace the unqualified teachers as the future of children was being compromised.
"There are many qualified teachers looking for work so there is absolutely no reason why we have this situation. This is serious because we are talking about elementary education which forms the basis of all else that follows. If the foundation is not done properly, you can rest assured that the structure will definitely fall down," said another resident.
Others also condemned the facilities themselves, saying the building was not suitable to act as a learning facility for the young children who are affected by noise whenever there is a function at the hall. They urged council to quickly budget for the construction of proper structures.
The Chitsanga Hall ECD class accommodates many children from poor areas of ward 3 as well as the old houses commonly as Majaradha in Ward 4.
The children learn in crowded conditions while sitting on substandard chairs and there is no definitive uniform for the kids. The centre is so despised that primary schools in the town do not want to accept children who graduate from there.local
Share !