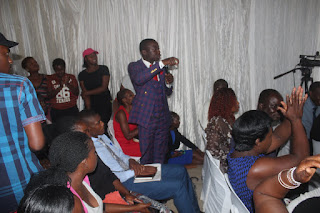 A participant stresses a point during the discussion

MASVINGO – People who took part in an election debate organised by the Election Resource Centre (ERC) at Flamboyant Hotel this afternoon expressed displeasure with the requirement for a proof of residence for one to be registered as a voter.
Many people who made contributions at the event, which had Ruvheneko Parirenyatwa as host, made it clear they do not see the reason why they should prove their village of origin when that information is already captured on the national identity card.
"Some of us are here in town but we want to be registered as voters back in our rural homes. The problem is that we are still required to produce a letter from the village head confirming that we are resident is his village. There is no logic in that because village of origin is one of the particulars captured on the ID card," said one participant.
There were also complaints that the proof of residence requirement disenfranchises the youth because the overwhelming majority of them do not have houses of their own.
"It is being said the country needs young people to vote but that is not going to be possible because the youth are the least likely to get those documents. They don't have houses of their own and they have to do all the pleading with parents and landlords to get that proof," another participant said.
People's Democratic Party (NPP) spokesperson Jeffryson Chitando, who was one of the panelists, criticised the Zimbabwe Electoral commission (Zec) for failing to engage political parties on the Biometric Voter Registration (BVR).
"Political parties are major stakeholder but there has never been any meeting with us. That is the reason why there is so much ignorance and a lot of misconceptions about the process," said Chitando.
MDC-T secretary general Doulas Mwonzora expressed concern over the hassles that people are encountering to get proof of residence but urged people to do all they should do to be on the new voters roll.
"Young people should particularly be encouraged to vote in their numbers. When Rex Nhongo and Josiah Tongogara liberated this country, they were younger than many of us here. As the MDC-T, we say the election should accord the secrecy of the vote, the security of the vote and the security of the voter," said Mwonzora.
Gutu South Member of Parliament (MP) Dr Paul Chimedza, who was recently appointed Minister of State for Masvingo Provincial Affairs, said Zanu PF was hard at work mobilising its supporters to register to vote.
"There are some challenges being talked about for instance the distance some people in rural areas have to walk to get to the registration centres but generally, the exercise is going on very well. As a party, we are busy mobilising our people to register to vote," said Dr Chimedza.top news
Share !