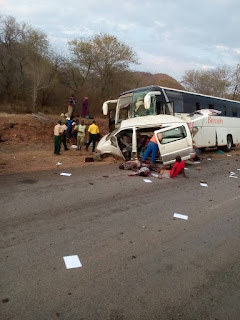 ZVISHAVANE - Five people are believed to have died on the spot while three others were taken to the hospital in critical condition after a Bulawayo bound Bercam bus rammed into an overloaded pirating Toyota Granvia car.
The accident occurred on Monday near the 10 km peg from Zvishavane along Bulawayo road at around 17:00 hours.
It is said the Toyota Granvia driver, who was travelling to Mberengwa, spotted a police road block ahead of him and attempted to make a U-turn in front of a Bercam bus that was following behind, resulting in the horrific crash.
The Toyota Granvia was hit on the drivers' side and dragged for about 50 metres, killing about five people on the spot.
Acting Midlands Province police spokesperson, Assistant Inspector Ethel Mukwende confirmed the accident.
"The accident happened but I cannot comment any further since there are more than three deaths involved. When more than three deaths occur it will be the duty of the national spokespersons to comment not us," said Assistant Inspector Mukwende.
She however refused to give further details saying any other information could only be provided by the national office in the event that more than three people are killed in an accident.
ZRP national spokesperson Senior Assistant Commissioner Charity Charamba could not be reached for comment by the time of going to press.top news
Share !