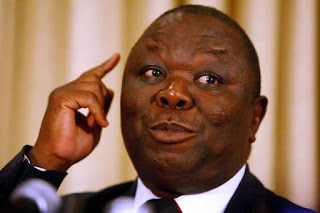 …your problems have a political solution

The Morgan Tsvangirai-led MDC-T says informal traders need to fight back against President Robert Mugabe's recent order for a crackdown against them by registering to vote in large numbers.
Vendors are facing sustained pressure from a strong combination of municipal and riot police to leave the streets.
The opposition party emphasised that the crackdown against vendors can only be defeated if all vendors registered to vote, saying it was Mugabe's problem that he failed to deliver on his 2013 promise to create 2.2 million jobs.
MDC-T national youth boss Happymore Chidziva said the people of Zimbabwe are a hardworking lot trying hard to make ends meet through honest means.
"Mugabe created a vending nation because he failed to deliver on his election promises. Right now, we have Zimbabwean in every corner of the world running away from him.
"Those that choose to stay in the country are mostly unemployed and they end up selling various items on the streets because there are no jobs. Mugabe promised them jobs but he did not deliver on that promise and now he wants to rob them of their only means of survival," said Chidziva.
He said if Mugabe really wanted vendors off the streets, he had to create employment because most of the vendors are educated people with no choice.
"The problem we are facing as a country today has a political solution. Vendors should register to vote in their numbers and remove a regime which has robbed them of their future.
"We have been stripped of all human dignity by Mugabe and I say register to vote, go vote and defend your vote. Mugabe has failed to offer solutions to the high levels of unemployment bedevilling the county so people should exercise their constitutional right to vote," said Chidziva.local
Share !