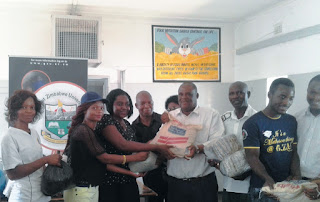 The Great Zimbabwe University (GZU) first year Psychology students last Friday gave a donation to the Ngomahuru Psychiatric Hospital.
The department falls within the Julius Nyerere School of Social Sciences and has made a commitment to donate to the less privileged at Ngomahuru every semester.
This initiative started in 2015 and has been running for two years now. The department, through its first year, first semester (1:1) students, gives donations as part of moulding a culture of social responsibility.
In the past, the department donated sandals after noticing the serious shortage in footwear at the institution, and it also gave a radio set for entertainment.
This semester, the students donated kapenta and sugar beans and other food items including cooking oil and sugar.
Psychology department chairperson Herbert Zirima said the initiative was done entirely by the students and was pioneered by the first Master's class of 2015.
"We will not tire to go out of our way to aid the hospital for as long as we are able," Zirima said.
The medical superintendent at the hospital, Dr Parirenyatwa Maramba expressed gratitude to the university and students for the benevolent gesture.
Dr Maramba said the institution relies on donor and government funding and any form of donation it can get.
He said there was malnutrition at the hospital because there is often very little if any protein-giving foods like meat.
The hospital has a 300 bed capacity but currently has close to 200 patients and it is taking two GZU students for work related learning every year.
Mpokiseng Tlou, who is attached with the institution, said she was gaining vital knowledge through her work at the institution.local
Share !