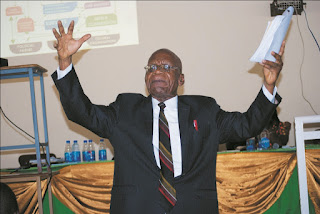 MASHAVA - Zimbabwe Media Commission (ZMC) Chief Executive Officer (CEO) Dr Tafataona Mahoso, whom many have dubbed the media hangman, last week dismissed claims that he was one of the chief architects of the hated Access to Information and Protection of Privacy Act (AIPPA) but was quick to defend the piece of legislation as useful.
Delivering a lecture on cyber security to media students at Great Zimbabwe University (GZU)'s Simon Muzenda School of Culture and Heritage Studies, Dr Mahoso said he did not take part in the crafting of what is widely regarded as a repressive piece of legislation, but insisted the law was there for a good reason.
"People are saying I and Professor Jonathan Moyo masterminded AIPPA. The answer is we didn't. AIIPA was not even put in place by President Mugabe. It is a law which was put in place by the government for security reasons and it is there for the good of the country. Many people are saying it's a bad law, it's a draconian law, and it's there to suppress media freedom and do many more bad things. People have to read it (AIPPA) better to understand it," Dr Mahoso said.
He also mocked the newly-created Ministry of Cyber Security, Threat Detection and Mitigation which is headed by Patrick Chinamasa, arguing it defied logic to try and control something which was already out of hand.
He said what was needed was to properly educate the young generation on the dangers of abusing social media rather than try to muzzle the platform altogether.
"Munhu akavhara danga mombe dzapaza tingati anepfungwa here? That is the same as trying to regulate social media when it is already out of hand. What is needed is for the institutions to impart the rightful education to the students," Dr Mahoso said.local
Share !