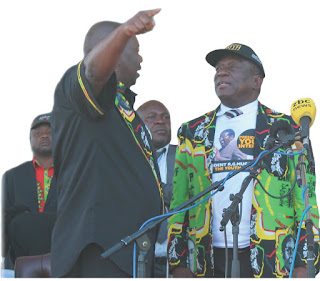 President Robert Mugabe is in catch 22-situation ahead of the extra-ordinary congress in December as he is struggling to decisively deal with the ever increasing tension between his wife Grace and Vice President Emmerson Mnangagwa ahead of the 2018 general elections.
Immense pressure from Zanu PF youth and women leagues who are pushing for constitutional amendments to elevate a woman into the presidium is mounting, a situation which analysts say is targeted at demoting Mnangagwa.
Political analyst Dr Takavafira Zhou said though Mnangagwa's rivals from Generation 40 (G40) are pushing for his ouster at the extra-ordinary congress slated for December, it was unlikely that the VP will be fired as that would spell doom for Mugabe and his party come 2018.
"It is clear that Mugabe is desperate to please his cunning wife Grace but the truth is that Mnangagwa is not going anywhere. I think a sober analysis would be to say Mugabe needs Mnangagwa now more than ever," said Dr Zhou.
"He cannot afford to break ranks with him with an election around the corner; dismissing Mnangagwa will be like shooting himself in the leg. Zanu PF will definitely perish without Mnangagwa," he added.
Zanu PF deputy secretary for legal affairs, Paul Mangwana was also quoted in the media sharing the same sentiments that Mnangagwa will not be demoted at the extra-ordinary congress.
"Those who are pushing for the removal of Mnangagwa are small boys; we are a very mature party. The party has been there since 1963 and as a party, we deal with real matters not individuals," Mangwana is quoted as saying.
As the stage has already been set for Zanu PF December congress, Mugabe – analysts say – is caught between a rock and a hard place as he seeks to please his belligerent wife Grace who is believed to be eying the Vice Presidency if the party's constitution is amended.
All the ten provinces have already given a nod to host an extra-ordinary congress which many believe is aimed at kicking out Mnangagwa.
Masvingo, which Mnangagwa recently claimed was a sovereign province, also endorsed Mugabe to call for an extra-ordinary congress but refused to have the party's constitution amended to create a women's quota.
"If Mugabe fires Mnangagwa, the ruling party would definitely lose votes in Masvingo and Midlands. These two provinces constitute the majority of the voters in the country and Mugabe is well aware of that – I'm sure he will not take the risk of firing Mnangagwa at this moment in time," said Dr Zhou.
"The biggest challenge he faces is his wife who thinks that power is sexually-transmitted. Even if they are to amend the constitution, Mugabe is likely to appoint a third deputy but not Grace because she is the least qualified person.
"There are other women in Zanu PF who are better qualified to be Vice Presidents among them Oppah Muchinguri and president of the Senate Edna Madzongwe. Grace is a liability to national politics but there are other politically-mad people in Zanu PF who think she will be Mugabe's deputy," he added.
Midlands-based analyst Timothy Mukahlera said love has already been lost between Mugabe and Mnangagwa but they will not part ways for strategic reasons.
"Mugabe has to tread carefully coming to the congress because he may sink the Zanu PF ship for good. They do not like him (Mnangagwa) but they need him to boost the election.
"They have rocked the boat so much that they fear firing Mnangagwa will create more problems than they are trying to solve right now. If they are to fire him, it will be well after the elections," said Mukahlera.
However, other analysts like Dr Mabweazara Mugodzwa believe that Mnangagwa is in his last days as President Mugabe's deputy.
"There is no doubt that Mnangagwa's enemies will come at him with all they got and he will be fired. They have waited for Grace to mature as the Women's League boss and now she is ready for her next step.
"G40 fears Mnangagwa so much that they cannot afford to leave him with any powerful post because he will turn against them. Masvingo and Midlands provinces will try to save him but they are a minority.
"They want to use the women's quota as a pretext to execute a plan they have been hatching for a very long time. Mugabe is being advised by people who want to destroy him so at this point, he can do anything," said Dr Mugodzwa.top news
Share !