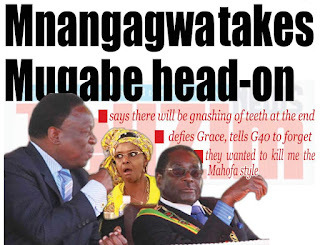 . . . says there will be gnashing of teeth at the end
. . . defies Grace, tells G40 to forget about taking over presidency
. . . confirms he was poisoned at Gwanda rally

GUTU - Embattled Vice President Emmerson Mnangagwa last week shocked many who had ruled him out as a political lame duck who watched helplessly while his supporters were being crushed when he, for the first time, launched a scathing attack on the First Family the rival Generation 40 (G40) faction saying there will be gnashing of teeth at the end.
Speaking at the memorial service for the late Minister of State for Masvingo Provincial Affairs Shuvai Mahofa, Mnangagwa stunned the gathering when he opposed President Robert Mugabe and his wife Grace by urging the province to continue doing what it has always been doing, saying there was nothing wrong with that.
He went on to anoint Masvingo as the best province.
At the Presidential Youth Interface Rally held at Chipadze Stadium in Bindura a few weeks ago, Mugabe and his wife called Masvingo to order, accusing the province, alongside the Midlands, as the citadel of factionalism ravaging Zanu PF.
Mnangagwa said the people of Masvingo should not be intimidated by anyone as long as they continue standing by their convictions, insisting that there was nothing wrong in supporting "one of your own".
"There are others who may come and say bad things about you (Masvingo) but that is just empty talk. Masvingo is the backbone of the party; I don't see anything wrong by supporting one of your own.
"Vekumavhitori (Masvingo) vanoti kumagumo kune nyaya. Tasvika here panyaya? Ukahwa vanhu vachiti kumagumo kune nyaya zvivheneke uone kuti painouya nyaya iyi uri papi. (Masvingo you sang the song 'kumagumo kune nyaya at last conference; one therefore, should do self-introspection to see where they will be standing once the imminent end comes). There will be gnashing of teeth at the end," said Mnangagwa.
The song 'Kumagumo kune nyaya' proved to be a bitter pill to swallow for Mnangagwa's rivals during the last year's Zanu PF national conference in Masvingo when Mnangagwa loyalists broke into the song, forcing Ignatius Chombo, the Zanu PF secretary for administration who is believed to be a G40 member, to interject and try to force the singers to clarify what they meant with the song.
In what seemed to be an indirect attack to G40, Mnangagwa boasted of being part of those who started the journey.
"Munhu anofanira kufunda kuti gwendo gwunofambiwa sei nevakagwutanga. Kana wopindira mugwendo pakati wobva wati gwendo gwava gwangu hausviki kunofanira kuti gwendo gwukusvitse (People should learn from those who started the liberation journey and follow their footsteps instead of trying to hijack and lead the way for they risk getting lost along the way).
"Zvinhu zvose zvine ronga. Hauteyi riva mugomo uchida kubata mhashu kana kuisa duvu mugwizi uchida kubata tsuro hazvigoni. Vanohwisisa hwisisai, vonovona vonesesai nguva ichipo (There is logic to everything. One cannot cast the nets in a river and expect to catch a rabbit or set a trap in the mountain and expect to catch fish. Those who have ears please hear me very well and those who have eyes you should see properly while there is still time)," said Mnangagwa.
Political analysts said Mugabe and his wife have for long been playing the tribal card against the people of Masvingo and Midlands but are now facing resistance.
"Mnangagwa got an awakening call at the youth interface rally in Bindura where the people from Masvingo and Midlands were attacked and now he wants to show Mugabe and his wife that he, too, can play the tribal card," said Dr Takavafira Zhou.
"Mnangagwa realised that his base was being eroded and circumstances pushed him to make a stand. His enemies wanted to weaken his base and ultimately boot him out of Zanu PF. Mnangagwa is now more dangerous especially with the belief that there was an attempt to end his life," he added.top news