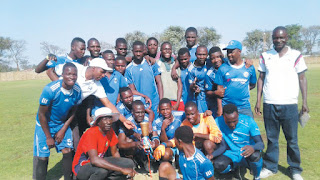 MASVINGO – The Masvingo General Hospital football team, More Fire won the Boys to Men Forum Foundation (Bomeff) HIV and Aids tournament held in Mucheke Stadium last Saturday.
Bomeff organised the competitions as part of efforts to encourage men to participate in HIV and Aids awareness activities.
All the four teams that participated in the tournament walked away with a prize money and these are the city council team Waru Waru, Bomeff, Anglican Church and More Fire.
Waru Waru played against Bomeff in group stages and lost by four goals to three in penalty shootouts while More Fire played against Anglican Church and won by a goal to nil.
In other matches, Anglican Church lost to Waru Waru by a goal to nil while Bomeff played against More Fire in the final match and thumped them 4-0 to win a prize money and a floating trophy.
Bomeff director Shepherd Mavhudzi told TellZim News that they were planning to incorporate more teams in the future so that men can be more conscious to the need for healthier lifestyle choices.
"We are there to encourage men to come forward and get tested for HIV and Aids so that they can know their status and we also urge them to correctly and consistently use condoms. We also encourage all people to live healthy by abstaining from casual sex and being faithful to their partners," Mavhudzi said
He said Bomeff was planning to form men discussion groups to explore such issues to do with HIV and Aids.sport
Share !