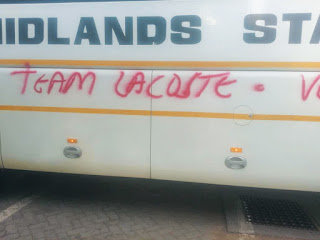 The shuttle that was soiled with graffiti

GWERU – There was drama recently after the Midlands State University (MSU) security on Tuesday last week woke up to find some of the buildings as well as one of the institution's buses spray-painted 'Team Lacoste'.
Though MSU director of information Mirirai Mawere could not be reached for comment, it is understood the act left university authorities shocked as they had reportedly not expected the ruling Zanu PF party's factional battles to be extended to the campus.
The inscriptions, reading 'Team Lacoste. Vote Noah Tshuma for SRC Presidency,' were reportedly done on the same night that President Mugabe reshuffled his cabinet and either demoted or dropped most of the alleged Team Lacoste members.
The Midlands province is considered a Team Lacoste stronghold as it is Vice President Emmerson Mnangagwa's home area.
"Students have always been aligned to political parties, indirectly, but not to this extent. They are now aligning themselves directly with factions at the national political level. We are surprised," said one official who preferred anonymity.
Another official also said security must be in a position to know who did that since the parking area is always guarded and is monitored by close circuit cameras.
"Security should have answers because they guard the parking areas 24/7 and they also have security cameras to monitor all that happens," another official said.
Some students told TellZim News that the university had responded to the embarrassing graffiti by tightening security and suspending the affected bus from shuttling students around.
"They are now checking visitors too because they suspect it could be the work of outsiders," another student said.
Student activist Makomborero Haruzivishe however said political consciousness at campus seemed to have risen dramatically following the President Mugabe's Midlands leg of his youth interface rallies.
"These are manifestations of infighting looming in students' politics. The interface rallies are also not helping because many students feel they are being used to shunt a biased factional agenda.
"It is however unfortunate and worrying those students are being made to divert from their co-business of learning and being dragged into the mess. Something should really be done to stop the rot because students should work only to advance their interests.local
Share !