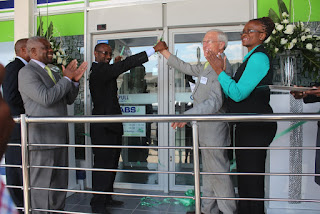 MASVINGO - It has been in Zimbabwe for well over a hundred years, has survived two World Wars and withstood the worst of all economic crisis to ever hit the country in 2008.
Old Mutual, the integrated financial services group referred to as a reliable friend in uncertain times, on Monday opened its refurbished CABS Masvingo branch at a well-attended high profile ceremony.
The event was graced by guest of honour and Old Mutual board chairperson Tim Johnson who praised the collective effort put together by all stakeholders in support of CABS.
"We are now opening the refurbished CABS bank Masvingo branch as well as launch the green zone concept. We believe in the future and people need an icon like Old Mutual to stand with them in trying times," said Johnson.
He said Old Mutual had found itself operating in the worst of situations but during all that, it has never folded or downsized.
"We all need someone to stand in our corner during trying times. Old Mutual is a certain friend in uncertain times. We have survived two World Wars and the worst economic crisis to ever hit the country in 2008 but we kept our heads up high and we continue to shine," said Johnson.
The event was attended by the business community among them OK Zimbabwe manager Mahiya, N.Richards Group regional director Andrew Chekani, Hilthru Enterprises director Taguma Benjamin Mazarire, City of Masvingo mayor; Hubert Fidze and Town Clerk Adolf Gusha, Reformed Church University (RCU) Vice Chancellor Professor Wiseman Magwa among other dignitaries.
On Tuesday, the Old Mutual team moved to Chiredzi where they opened another refurbished CABS branch and launched the green zone concept.local
Share !