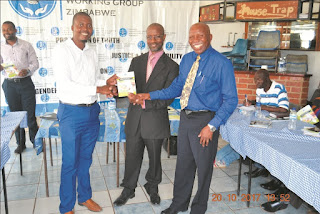 MASVINGO - The proposed National Peace and Reconciliation Bill (H.B2, 2017) was crafted in a hazy manner, a weakness which leaves a lot of gaps in the country's efforts to fully account and bring closure to its turbulent past, the National Transitional Justice Working Group (NTJWG) has said.
The group hosted a stakeholder discussion in Masvingo last Friday where it was heard that the bill, which now awaits President Robert Mugabe's ascension, contained numerous errors of commission and omission that will make ultimate healing difficult.
NTJWG executive director Blessing Gorejena pinpointed what she called the bill's 'many blind spots' that will weaken the National Peace and Reconciliation Commission (NPRC)'s hand in executing its mandate.
"Most contentious of the bill's provisions is probably the issue of the Ministerial Certificate which the minister in charge of state security can serve on the commission to interdict it from revealing any information which he/she feels could work against national interest.
"The bill also lacks victim-centredness as it does not at all talk about the victim and the perpetrator such that we are left to guess on that although the logical assumption is that in any post-conflict settlement, there is a victim and there is a perpetrator," said Gorejena.
She urged people to participate in consultative meetings on the bill and make their opinions known, saying though the bill was vague in many respects, it still offered a critical starting point.
"It's not one of those bills you would want to celebrate and say, yes, now we have arrived but it offers a starting point nevertheless. It is not perfect but it motivates dialogue," she said.
The Legal Resources Foundation (LRF)'s Rumbidzai Chivasa concurred, saying the current bill, though not the most ideal, was better than its predecessor the National Peace and Reconciliation Bill (H.B 13, 2015) which was gazetted in 2015 but was withdrawn from parliament in May 2016 after severe criticism by stakeholders.
"The current bill is not the best but it is different from the previous one. We have somewhere to begin and we urge all people to take this process towards national healing seriously by participating in all discussions," said Chivasa.
Heal Zimbabwe Trust research and policy advocacy officer Edknowledge Mandikwaza said once the NPRC begin to operate, it must take into consideration the different episodes of grievances and victimisation that happened in the past.
Mandikwaza also said not all grievances are political in nature as some of them tend to take a socio-economic dimension as exemplified by such sad chapters as Chingwizi, Chisumbanje and Chiyadzwa as well as the perceived economic marginalisation of certain regions.
"We have also found that people want a public acknowledgement of rights violations that were committed against them, accompanied by employment creation and reparations," said Mandikwaza.
Once signed into law, the bill will operationalise the NPRC, one of the five independent commissions established by Chapter 12 of the 2013 Constitution of Zimbabwe.local
Share !