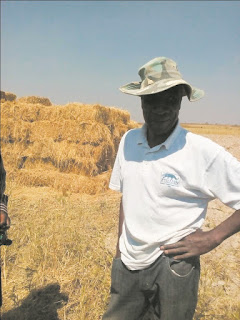 Rtd Brig Matavire standing close to heaps of hay. If wild fires are not stopped, his cattle will starve

GWERU – Whenever summer approaches, it is sad news for Somabula residents who have to grapple with the menace of raging fires that are often times deliberately caused by illegal game hunters and fish poachers.
Rtd Brig Brave Matavire has a farm approximately 20 km from Gwenoro Dam and he says illegal fishermen start fires that then spread to people's homesteads especially during the night.
He says game poachers are also starting veld fires in the wild so as to trap animals but in most cases, the fires are getting out of control.
"Often times, we see fires approaching our homesteads from Gwenoro Dam where fish poachers make fire and never put it out when they leave their bases. The most irritating of these people are however those who hunt game by using fire as a trap because in most cases they lose control of the fire," Rtd Brig Matavire said.
He is a victim of the raging fires himself, having lost stock piles of hay that he had intended to feed his animals in the long dry season.
"What we need is enforcement. We have a village watcher who traps these notorious poachers but we also need visible police presence to deter the poachers once and for all. It's sad to see them concentrated on roadblocks while ignoring environmental issues," said Rtd Brig Matavire.
Ward 15 councillor Sibongile Matavire, whose area is regarded as one of the most vulnerable to wild fires, said if the police could complement the efforts of the Environmental Management Agency (EMA), most of those enemies of the environment would be scared away.
"I think the police is not doing enough. If their commitment could match that of EMA, we wouldn't be facing these challenges," said Cllr Matavire.
The area's usually tall grass sustains the livelihoods of many families that cut the grass for thatching purposes and for sale but people of the area say veld fires are destroying it all.
"We survive on grass business. It is the business by which our parents raised us but with these recurrent fires, we have become poorer. Those at the top must find a solution to catch people who start veld fires and give them heavy penalties," said Priviledge Maburutse.
TellZim News managed to talk to Ministry of Agriculture chief engineer Gerald Chirapa who said a team he leads was on a national tour to see how challenges that threaten the nation's harvest could be dealt with.
"For now we just advise famers to use available measures to safeguard their environment from veiled fires. Fires cause a lot of losses as far as productivity in the farming business is concerned and that should be stopped," Chirapa said.local
Share !