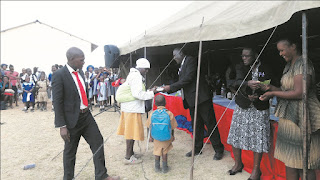 The best parent receives her prize at the event

CHIVHU - Runyararo Primary School, undoubtedly one of the best primary schools in town, recently held a colourful price giving ceremony which saw prizes being awarded not only to pupils who excelled in academics and sporting activities but also to parents and school staff.
The ceremony was attended by dignitaries from the Ministry of Primary and Secondary Education, government officials, parents and school heads from neighbouring schools.
The event lived to its billing with exquisite and energetic displays from the school drama and dance group.
Speaking at the event, School Development Committee (SDC) chairperson Maxwell Makurumure thanked parents for the support which enabled the school to build a good administration block and a new ablution block for ECD pupils.
He thanked CBZ, CABS, Jobcel and the Chivhu business community for donations that made the ceremony possible.
Chikomba District Schools Inspector (DSI) Emmanuel Kwenda, in a speech read on his behalf, praised the efforts made by the school for development.
"We are delighted with developments at the school; the high pass rates and excellent participation in sporting activities. I urge all pupils to keep on working hard and thumbs up for the wonderful organisation of this event," he said.
Pupils who topped in academics were the big winners and they went away with uniform vouchers from Jobcel while others went away with school stationery mainly in the form of reading and writing books.
Trophies and shields were also won while staff members and parents received prizes for their efforts in the development of the school.local
Share !