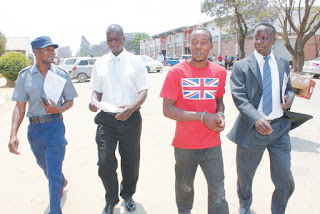 RUSAPE – An unrepentant felon who was serving a 220-hour community service sentence at the Rusape Magistrates Court allegedly broke into the district prosecutor's office and stole six rims of bond paper, 2 boxes of staples, an ink pad.
Three days later, Shorai Pleasant Doriro (21) also broke into the office of an assistant accountant where he force-opened a locked cash box and got away with US$330.
Doriro, of NE 54 Vengere, Rusape, was serving yet another sentence for unlawful entry when he committed the offences on September 27 and 30.
On his second appearance in the Rusape Magistrate Court on October 9, magistrate Patience Madondo remanded him in custody to October 16 for continuation of trial.
It is the State's case that on September 26, Doriro tried to forcibly gain entry into district prosecutor Tirivanhu Mutyasira's office but failed.
The following day, he brought a hoe which he used to pry open the door and gain entry into the office where he stole the items.
The break-up was reported at Rusape Police Station on September 28 leading to the arrest of the suspect on October 1.
By then, he had sold some of the items to a fellow Vengere resident for US$11 while the rest was sold to another resident for US$18 which was paid through EcoCash.
After his arrest, he led the detectives to 48 Manda St and 38 Tongogara St where the people who bought the stolen property reside.
On September 30, Doriro had used the same strategy to gain entry into the assistant accountant's office where he stole the cash and some receipts.
He then went further to conceal the empty cash box, receipts and the hoe in a drain at the same premises before going away.
All the stolen money was recovered.
Tafara Chawatama appeared for the State.local
Share !