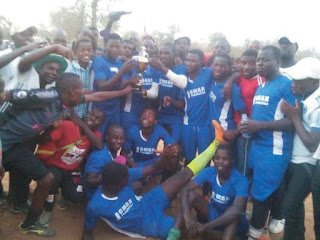 MWENEZI - There were wild celebrations at Rutenga growth point last Saturday after Rutenga United won the J.S Omar Foundation Cup finals in a tightly contested match against Ward 5 football team.
Rutenga Utd fans and players burst into celebration after their team walloped their rivals 2-1 in penalty shootouts following a nil-nil all draw at full time.
The win saw Rutenga Utd bagging US$300, a trophy, a ball and soccer jerseys while the defeated team went away with US$200, a trophy, a ball and soccer jerseys.
In netball, Ward 4 walked away with US$200, a trophy, jerseys and a ball after thrashing the Ward 13 netball team which went away with US$100, trophy and jerseys.
In an interview with TellZim News J.S Omar Foundation district coordinator, Norman Mukondo said the thrust of the tournament was to identify talent and build social harmony through sport.
"The tournament, which started at ward up to district level, is going to be an annual event. The idea behind this is to promote unity through sports. We also want to identify talent among the youth and to keep them occupied so that they refrain from drug abuse," said Mukondo.
Speaking after the game, Rutenga Utd coach Nicholas Shoko thanked tournament organisers and said more assistance was needed so that talent can be developed.
"We are delighted because our MP Joosbi Omar has organised this tournament for the benefit of the people he represents. It allows the youth to have a strong sense of constructive interaction. We also believe that next time, the MP will hire scouts from big teams for the purpose of talent identification.
"We also beg for assistance so that we can be promoted to division two. My team has got talented players but their progress is being hindered by financial constraints," said Shoko.sport
Share !