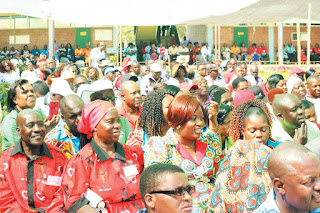 Part of congregates at the Mutare couples conference

MUTARE – Roman Catholic were last weekend urged to safeguard their marriages in face of the ever-increasing number of divorces being filed at the High Court.
This was said during the 12th Annual Catholic Couple's Conference held at St Joseph's Catholic Church in Mutare.
The conference, which was held under the theme 'Eucharist: The Life Blood of Good Catholic Family Life', was graced by Father Martin Gambiza who is the National Spiritual Director.
"Do you know more than a thousand couples have filed for divorce at the High Court in 2016? That is very bad for marriage is an institution ordained by God. It is thereby very important that we become faithful as partners so as to safeguard our marriages.
"It has now emerged as if it's fashionable to have extra marital affairs but that has killed marriages. You hear people encouraging each other that you need an 'SBG' meaning a 'Stand By Generator'. That is very bad behavior because these SBGs have resulted in collapse of many homes," Fr Gambiza said.
He also said marriage was a triangle held intact by three corners each being represented by wife, husband and God.
"Marriages should not be guided by any party except the wife, husband and God who is the main consultant whenever problems arise. That is why it is said a family which prays together, stays together," said Father Gambiza.
Meanwhile, dates for the 2018 13th National Couples Catholic Conference have been set for September 27 and will be held in Victoria Falls.local