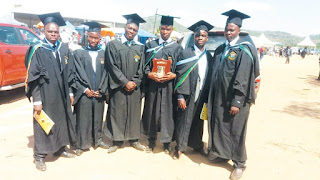 The fastest growing privately-owned community newspaper in the country, TellZim News last week Friday made history at the Great Zimbabwe University (GZU)'s 11th graduation ceremony when a total of seven of its staff members graduated each with an honours degree mainly in Media and Cultural Studies.
The development places TellZim News at the apex as a community newspaper with the most educated staff in the country and it also makes it one of the newspapers with the highest number of degreed journalists across the board.
Most outstanding was news editor Moses Ziyambi who won a whopping six awards for his efforts which included being the best Media and Cultural Studies student as well as being second best student for the whole Simon Muzenda School of Arts and Heritage Studies.
The accolades were the Vice Chancellor's Award, the University Book Prize, FMS Global Solutions shield, Jadecon Construction and Engineering prize for being second best student for the whole Simon Muzenda School of Culture and Heritage Studies which houses five departments, the Zimbabwe Media Commission (ZMC) prize for being the best Media and Cultural Studies Student and the Moonlight Funeral Services prize for obtaining a first class degree.
Beatific Gumbwanda, who writes from Chiredzi and Chipinge districts, also obtained a first class degree and was awarded the University Book Prize for his remarkable exploits.
Other TellZim News staff members who graduated are Upenyu Chaota; who reports from Masvingo, Itai Muzondo; who reports from Gweru, Siyabonga Sayi; who also reports from Gweru and Lloyd Shunje who reports from Mutare.
Company accountant Marylin Katenjele graduated with an upper second class Bachelor of Commerce (BCom) Degree in Accounting. 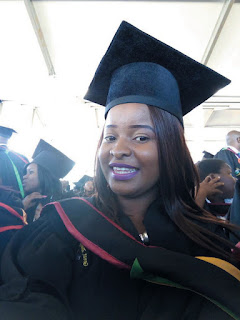 Many other students who will graduate from GZU and Midlands State University (MSU) next year and the year after have passed through TellZim News or are still doing their work related learning with the popular newspaper.
All this puts the newspaper on an equal footing with other indigenous Small to Medium Enterprises (SMEs) that are sweating it out in a tough economic environment to provide opportunities to young people as well as the very hope that graduates in the country yearn for.
TellZim News editor Passmore Kuzipa, in his remarks in the wake of the graduation ceremony, said what the newspaper had achieved was unprecedented.
"Here is a newspaper with barely two years on the market but already boasting the highest number of journalists with university qualifications.  This is really a record and it puts us within the right framework which we need in our quest to constantly innovate and improve our newspaper.
"We congratulate all the graduates for a job well done, we thank them for doing the newspaper proud and helping to market TellZim News as a brand of forward looking people who take the reader and the advertiser seriously.  We acknowledge that education and continuous self-improvement is the way to go; we want to make sure that our brand is personified by well-educated people," said Kuzipa.
When he came for the official opening of Hevoi FM in June this year, permanent secretary in the Ministry of Information, Media and Broadcasting Services George Charamba urged people in the media industry to 'go to school', saying he was fully aware that many people in the industry were practicing though they did not received requisite training.education
Share !