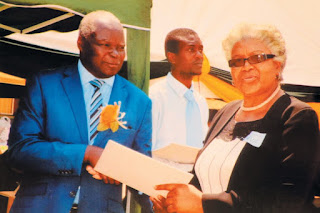 ZVISHAVANE - Shabani Primary triumphed in the November 2016 Grade 7 Examinations by attaining an incredible 100 percent pass rate to become the best performing primary school in the Midlands Province.
The school was awarded first position in the best urban school candidate's category and best primary qualitative candidate's category in the 101-200 category.
Shabani school head Jane Mdumo was jubilant over the achievement, expressing confidence in her staff that she credited for doing the school pride once again following their other prize back in 2015.
School Development Committee (SDC) chairperson Ekem Mudavanhu credited the achievement to hard work by stakeholders.
"I am very grateful to be associated with such a bunch of unique teachers and students. This achievement emanates from hard work, persistence and team spirit. Winning these prizes is not that easy and having scooped similar awards in the previous years is no small achievement.
"As Shabani Primary School, we have managed to produce quality results and maintain a 100 percent pass rate through effective hard work. The School Development Committee, the school head and members of staff all played a crucial role with the support from our dear parents and guardians.
"I would want to say congratulations, makorokoto, amhlophe to the entire Shabani Primary School team for such an outstanding performance. We now have an important task ahead of us; that of defending our dominant position and I am glad to say that come 2017 results, we will definitely be second to none," said Mudavanhu.education
Share !