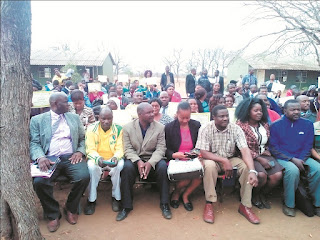 CHIREDZI – The Teachers Union of Zimbabwe (TUZ), which is believed to be pro-Zanu PF, has urged teachers to withdraw de-subscribe from unions that attack the government without offering solutions to the problems faced by teachers.
The attack is believed to have been directed at the Progressive Teachers Union of Zimbabwe (PTUZ) and the Zimbabwe Teachers Association (Zimta), the biggest teachers unions with standpoints that have been described by some as 'anti-government'.
TUZ held its 18th information and communication technology workshop where 113 teachers were trained at Mwenje Primary School in Chiredzi East constituency.
Addressing undergraduate trainees at the event, TUZ president Timon Tandi labelled the rival unions 'unpatriotic and unruly' for allegedly criticising government without offering any solutions to solve the problems.
"I advise teachers to avoid unions which are unpatriotic, who always criticise the government without giving solutions. We are here to offer solutions to the government as we have already responded to its call for the new curriculum," said Tandi.
Chiredzi East Member of parliament, Denford Masiya also weighed in saying teacher organisations always shout at politicians for alleged failures but without offering solutions to counter those shortcomings.
"These teacher organisations are known for shouting at the government. They shout at us MPs and the President that we are failures but no one has ever come with a solution like what I am witnessing here. TUZ joined the struggle for the teachers to be computer literate," said Masiya.
The union has trained 1190 teachers across the country on computer basics like Microsoft Word, Excel and Power Point 'to complement the government's new curriculum'.local
Share !