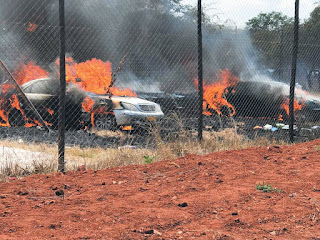 MASVINGO - A joyous moment between parents and their children at Riverton Academy boarding school last week turned ugly when two parents who had visited for a speech and prize giving day left the place poorer after their cars were gutted by fire.
Masvingo provincial police spokesperson Inspector Charity  Mazula confirmed the incident but could not give further details saying investigations were still in progress.
One parent, according to sources, wanted to treat her child to some grilled steak so she lit a gas cylinder to heat a braai stand.
In an unprecedented turn of events, some flames flew onto nearby dry grass and the fire spread rapidly spread to the nearby parking lot, sparking a fierce conflagration which burnt two luxurious cars to shells.
The vehicles belonged to other parents who were sharing some quality family moments with their children, and there was pandemonium as people tried in vain to douse the raging flames.
Sources said the accident was caused by one Nyarai Nyadenga from Harare and she managed to get her own car off harm's way before the fire consumed the other two unfortunate vehicles.top news
Share !