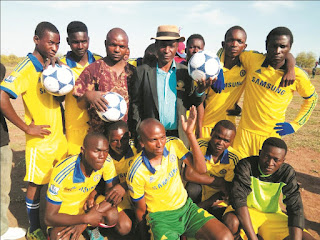 MASVINGO – The Wilson Maride Foundation Trust last week launched a soccer tournament and donated soccer balls to Masvingo South constituency ward teams as a way of helping young people there to spend their time doing something productive.
The donation took place at Chisase shopping centre where people from wards 24 up to 30 gathered to witness the work of charity.
Speaking at the occasion, Wilson Maride, who is founder of the foundation, said he had decided to share the little he had with people in his own home area.
"I saw it fit to give these balls to the youth in my home area so that they find something to do which gives them an opportunity to market their capabilities to those who scout for talent among youngsters," said Maride.
The trust has also partnered the Zimbabwe International Youth Investment Council (ZIMYIC) for a soccer tournament which is set to kick off soon. The winning team will then enter the ZIMYIC tournament which will be held at higher stages including at national level where the winners will walk away with US$20 000.
Maride, who is ZIMYIC member at national level, said the team which wins at ward level will automatically qualify for the ZIMIYIC district level competitions.
Headman Maregere, born Mapope Munodawafa, said he was humbled by the work done by the Wilson Maride Foundation Trust in support of the youth.
"Since Independence there is no one who has done what Maride has done. I was not invited here; I came alone to witness this. We need more people with such sense of commitment so that our area can develop," said Maregere.
In the past, the foundation supported the Mucheke Old People's Home, Alpha Cottages, Matthew Rusike Children's Home in Harare and has also donated a water tank to the expecting mother's shelter at Musvovi Clinic.sport
Share !