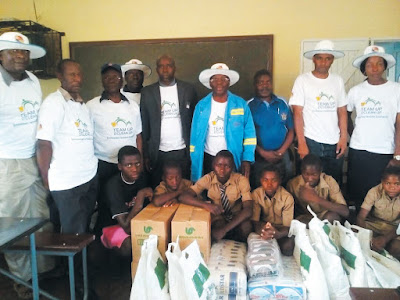 GWERU – The Zimbabwe Electricity Transmission and Distribution Company (ZETDC) last week extended their hand of charity to Gweru's Bluehills Rehabilitation Centre and Batanai Old People's Home respectively, an act they promised to annualise.
The company has also embarked on a successful clean-up campaign of the city centre before moving on to Blue Hills Rehabilitation Centre and Batanai Old People's Home to handover groceries consisting of maize meal, rice, beans and cooking oil.
Speaking during the groceries handover ceremony, ZETDC southern region general manager Engineer King Fazo Dube said the power company had decided to establish relations with the less privileged.
"It's nice to be associated with the less privileged. This donation is just the beginning of a long-term relationship which will bear a lot of fruits. What I hear from my colleagues is that this will also become an annual event. We wish to strengthen such relationships with the less privileged so that we are able to chip in times of need," Eng Dube said.
"You (Bluehills and Batanai reps) should also feel free to contact us whenever you need assistance. Our doors are open and you will receive assistance for free," he added.
Blue Hills Rehabilitation Centre acting superintendent Alexio Muguda thanked the ZETDC for the donation which he said had come at the right time.
"This donation just came at the right time. This also makes children we keep here know the world out there loves them. We urge more well-wishers to do the same because the children we raise can do wonders out there if they get the support they need.
"If it wasn't for legal reasons, I would name many influential individuals who are making positive contributions in this country who passed through this home," Muguda said.
Speaking on behalf of Batanai Old People's Home, Mivlett Mujuru said the institution would be in a better position with more similar donations.
"Most times, we are worried because of the hard times we often hit. We therefore plead with such corporate organisations with their help for the less privileged," Mujuru said.
Share !