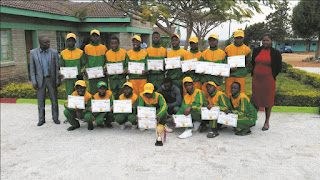 MASVINGO – Zimuto High School are the national baseball champions following their unequalled performance when they made their debut appearance at the competitions that were held at Allan Wilson High School in Harare.
Representing Masvingo province after sailing through the provincial competitions held at Victoria High School in August, Zimuto High proved to be a baseball giant in the class of its own.
They had booked the ticket to the nationals after overcoming such schools as Mucheke, Dewure, Rufaro, Gokomere, Mutendi and Masvingo Christian College at provincial level.
At the nationals, Zimuto High first played against Allan Wilson in the group stages and won by 9 runs to 7. In another match, they played against Emakhandeni High School and thrashed them by 10 runs to 4.
In the quarter finals, the increasingly confident team played against Mutare Boys High and beat them by 11 runs to nil.
In the finals, they played against Highfield High 1 and overwhelmed them by 17 runs to 13, setting the stage for them to be crowned the 2017 national baseball champions.
All ten provinces were represented and 14 schools participated in this year's nationals.
Zimuto team coach Nyengeterai Musada said she had been confident from the very beginning that the team was going to bring the trophy home as they had prepared hard.
"It was a well-deserved win as the boys had worked tirelessly in preparation for the games. I am proud of them because it was our first time to reach the nationals. We impressed even our bitterest rivals because we came out of the tournament undefeated," Musada said.
Zimuto school head, Harris Mashava said the school was impressed with the results, the coach and the team that worked very hard to clinch the trophy, US$1000 in prize money together with individual certificates for the players.
He also thanked the boys for the splendid performance that put the school on the map.sport
Share !