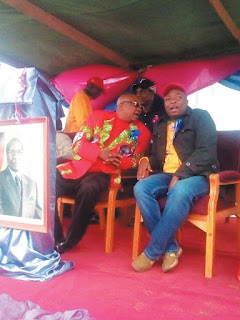 Chiyangwa left chats with Chipanga during the tournament

RUSAPE - Zanu PF legislators are seeking the services of the glitzy Zimbabwe Football Association (Zifa) president Philip Chiyangwa to help mobilise their supporters to register to vote.
Chiyangwa was recently the guest honour at Kudzanai Chipanga's tournament in Makoni West after he had graced Joseph Chinotimba's event in Buhera South.
He was also scheduled to grace Francis Nhema's event where he was expected to donate soccer balls.
Chipanga used his event at Tsansaguru High School in Rusape to encourage the people who braved the chilly weather to go and register to vote.
"After all these games, you should make sure that everyone is registered as a voter for next year's elections," said Chipanga.
Speaking at the same event, Chiyangwa said he was not dabbling in politics but was only fulfilling the Federation of International Football Association (Fifa)'s pledge to promote the game at grassroots level.
"I only go where there is order. These politicians come to ask for the balls I get under the Fifa programme because the agreement is for us to promote soccer in an orderly manner. Last week, I was in Chinotimba's area and tomorrow I will be in Nhema's area.
"My coming here today is to expose talent and to fulfill the promise made by the Fifa president (Gianni Infantino) during his visit here to our President (Robert Mugabe) that he will use me to create and set up 8000 football clubs around the country to develop soccer from the grassroots," said Chiyangwa.
He also called for all soccer academies to formally register their entities in order to make it easy to identify talent across the county.
"Everything that Zifa does is per statute. The question of owning an academy which you fail to register creates a problem for me to identify who you. For Zifa to give you support as an academy, you should be registered," Chiyangwa said. top news
Share !