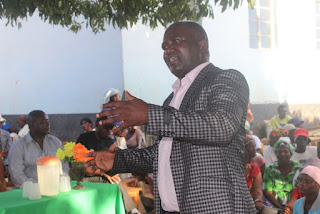 MASVINGO - The victorious G40 faction in the province is pushing for the seizure of Ezra Chadzamira's Cresta Ibeka Farm, TellZim News has learnt.
Chadzamira seized the farm from an elderly white woman, Yvonne Goddard in 2016 when his now vanquished Team Lacoste faction gained a momentary upper hand in its tussle with G40 over control of the province.
Now that G40 has walked away with the prize even at national level following the dismissal of Emmerson Mnangagwa, in whose name Team Lacoste was fighting, calls are being made for the farm to be returned to Goddard so that she can continue productively utilising it to the benefit of the local economy.
Goddard had stayed at the farm for over 45 years only to dramatically lose the farm when Chadzamira took over the farm, ignoring protests from the wider community as well as a section of the Zanu PF provincial youth league.
Addressing scores of people at the welcome ceremony of new resident minister Dr Chimedza, acting Masvingo provincial chairperson Amasa Nhenjana said the land issue in Masvingo had to be reviewed since there are countless irregularities in the way the land issue was handled.
Nhenjana expressed dissatisfaction with the way Chadzamira acquired the farm, saying Goddard should have never been kicked off her farm and property.
"Dr Chimedza we have a lot of problems regarding the land distribution in the province. Some of the people grabbed land which should not have been grabbed in the first place.
"It hurts me to think that an old lady who has been staying on her farm for over 40 years was kicked out by a young man who has the energy to go and clear land and peg his own farm elsewhere. That is what Chadzamira did at the Goddard farm," said Nhenjana.
He said old people black or white in Zimbabwe are the most loyal people to Zanu PF and the President does not condone their victimisation.
"We do not segregate people by the colour of their skin. President Mugabe likes all the people in the country the same because we are his people. For Chadzamira to go and kick out an old lady and render her homeless for his own selfish reasons defies logic.
"We need you to look into that issue minister," said Nhenjera who got a nod from Dr Chimedza.
Minister of Foreign Affairs Dr Walter Mzembi weighed in saying Dr Chimedza should make sure that there is equitable distribution of wealth in the province.
"We do not want greedy people in the province who want to control everything. I am a principled man and some people have hated me for it because I demand a clean government. Dr Chimedza you should review the distribution of land and mine claims.
"If you are not given enough information call us we will give you more because we know what has been happening," said Dr Mzembi.topnews
Share !