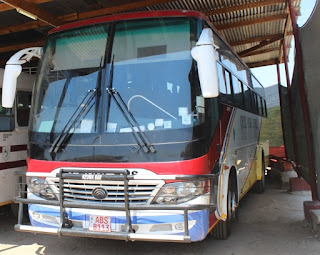 CHIVI - Chibi High head Bonface Machingauta has set the record straight saying the school bus was never hired by Zanu PF youth who attended the ninth Presidential Youth Interface rally in Bulawayo last week.
There have been speculations that the youth who went to the rally on board the Chibi High School bus had booed the first lady Grace Mugabe during her speech but Machingauta was adamant that their bus did not go there.
"I have learnt through the media that our bus was hired by Zanu PF youths to go and cause trouble in Bulawayo. I want to make it clear that our bus was never hired on the day in question.
"Our school bus was at school and those making the claims that our bus was in Bulawayo while it was in the garage at school are misinformed," said Machingauta.
Zanu PF Masvingo provincial political commissar Jeppy Jaboon alleged that a Chibi High School bus was hired by youths who went to Bulawayo to boo the first lady.
"They (Lacoste youth) hired a Chibi High School bus and went to boo the first lady in Bulawayo. We do not tolerate such indiscipline in the province. The youth were led by Charles Munganasa and we are going to launch an investigation," said Jaboon.
Munganasa denied the claims saying those were 'Castle Lite driven accusations'.local,politics
Share !