Chipanga throws Chinguno to the vultures 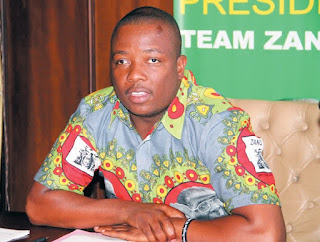 MUTARE - Zanu PF national nouth secretary Kudzai Chipanga has sent an independent team to probe the alleged fraud case involving Manicaland provincial youth chairperson Mubuso Chinguno who stands accused of embezzling US$400 000.
Last week youths in Chipinge staged a demonstration against Chinguno whom they accused of defrauding them of almost US$400 000 that was meant to develop residential stands in Chipinge town and Checheche growth point.
Chinguno has steadfastly rejected the allegations made against him, arguing that he was being victimised because he called for the removal of Vice President Mnangagwa and his replacement with first lady Grace Mugabe.
Speaking to TellZim News, Chipanga said he sent the probe team because he prioritised the concerns and grievances of the people of Chipinge.
"We have got laid down procedures in the party. We have heard our people's concerns and we have so far sent a team to do some fact finding work on the ground. We are now waiting for a full report from the team so that we can take action," added Chipanga.
Chinguno is alleged to have angered young people who were set to benefit from the stands when he allegedly ignored tender procedures and used companies that he and his proxies own to develop the stands.
He is accused of failing to fully service all the stands despite diverting the money to his own personal use.
The stands scheme for Chipinge was launched in September 2016, with 350 hectares of land at Redwell Farm being allocated for the establishment of a youth village. Fifty more hectares were earmarked for similar purposes at Checheche growth point.
Earlier this year, Chinguno threatened to seize council land from City of Mutare, accusing the MDC-T dominated council of sabotaging the youth's dreams to have their own homes.
"We will take the land in Dangamvura by force if the council will not let us occupy the land which is meant for the youth," Chinguno was quoted as saying.politics