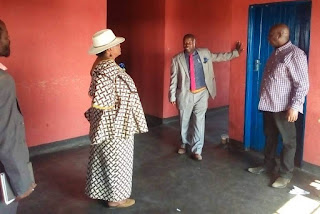 CHIPINGE – The Minister of State for Manicaland Province and Member of Parliament for Makoni South, Mandiitawepi Chimene last week hailed businessman Garikai Gwenzi for taking her advice to build a boarding school in Chipinge South, saying his Gutika Academy was testimony that local investors can do wonders in their communities.
Chimene was flanked by the Minister of Energy and Power Development, Dr Samuel Undenge as well as Chipinge South MP Enoch Porusingazi when she officially opened Gutika Academy in Checheche.
She challenged all resourced people in the district and beyond to emulate Gwenzi by investing in education and tangible assets instead of wasting money on luxury cars and other extravagancies.
"No one will come and build schools for our children. We are now our own bosses as we now possess the wealth. So if you have money, don't just move around buying people drinks and expensive cars but you have to invest by building tangible assets like schools.
"Gwenzi has already done wonders for the community and for his family. This school will never be closed even if Gwenzi passes on. You too must follow suit and invest your money wisely instead of just boasting around when you do not have any tangible asset," said Chimene.
She said she was humbled that Gwenzi had taken advice and built state-of-the art facilities that house the prestigious high school.
The minister said Gwenzi had initially wanted to build the school in Hwange but she had managed to persuade him to rather invest in his own home area so as to uplift local people.
"I am very glad that Gwenzi listened to my advice because we wouldn't have been here today if this investment had been made in Hwange," she said.
Gutika Academy made its first enrolment only in January this year but the school has already attracted the interest of parents from far and wide owing to the quality of its facilities, its emphasis on quality education and its uniquely low pupil/teacher ratio.education
Share !